The SEC has just announced charges in one of the largest frauds and fund failures since Madoff. Per Reuters, Germany's Allianz SE will pay more than $6 billion in fines and restitution following the collapse of the firm's Structured Alpha funds. Allianz's U.S. asset management unit also pleaded guilty to criminal securities fraud.

The SEC's complaint makes fascinating reading. What appears to have happened is that three key portfolio managers manipulated risk reports related to the Structured Alpha group of funds. These products promised additional alpha above their core benchmarks combined with tail risk hedging, relying on complex option and derivatives strategies.

The ringleaders were Greg Tournant, the CIO and head of the entire Structured Alpha Group at Allianz, alongside Trevor Taylor, Co Lead Portfolio Manager. Also charged by the SEC is Stephen Bond-Nelson, another portfolio manager. These men, aged 50-52, were not junior analysts - they were the leaders and most senior executives of the entire $10 billion+ Structured Alpha platform.

Their approach to amending risk reports was widespread, but not necessarily very sophisticated. The SEC states, for example: 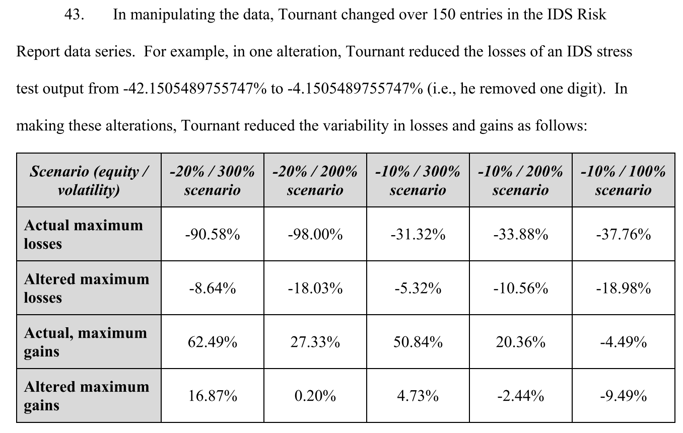 Also interesting is the fact that this Allianz unit represented to investors that the 500bp+ versions of the Structured Alpha strategy were hard closed with a $9 billion limit. However, the firm was actually closer to $12 billion.

Allianz's guilty plea carries a 10-year ban on Allianz Global Investors' providing advisory services to U.S.-registered investment funds, with the result that the existing book is expected to be sold to Voya. There is no reported impact on PIMCO, a separate subsidiary of Allianz.

Reviews of risk reporting are part of the IDD / Risk due diligence workflow, but there are nonetheless plenty of ODD lessons here.

In Castle Hall's view, this is a gamechanger of a fraud. Yes, smaller managers will continue to blow up, potentially with large financial impacts (think Bridging Capital with $1 billion plus in investor losses ). But such a pervasive, costly fraud; resulting from the lack of independent risk management; in an extremely well resourced global financial institution - is a reminder that fraud can happen anywhere.

The answer, of course, is independence. To prevent fraud, asset managers must create effective segregation of duties. They must then empower risk management teams, compliance, internal audit, external audit, administrators and valuation service providers, to name but a few, to bring rigorous professional skepticism and independent power and authority to the investment and fund management process. When that doesn't happen - either through poor work or the service provider viewing their "client" as the manager, not the investors who pay them - we will all continue to learn the hard way.

Previous Story
← Trouble in Paradise - BVI and Reputational Due Diligence
Next Story
Asset Managers Say Your DDQ is 50%+ Duplicative. →